Innovative Technology has invented a unique custom designed solution to enhance the automation of Pilgrimage Health Services in a unique unmatched fashion that allowed a feasible user-friendly solution for electronically capturing not only the patient-doctor encounter in Mass-health care situation, but the whole workflow cycle. 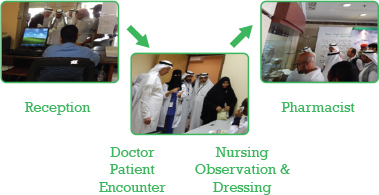 It has entertained an unpreceded success for the following reasons

Put your pen on Cradle to Sync Data

By performing what is considered to be a natural straight forward writing process, data is captured by the digital pen, recording the exact stroke shape and location, while time stamping those pen strokes

As the digital pen is put in its docking station, data will be transferred automatically from the pen to a remote server, through a USB server device, without the need for a computer beside the pen

Data uploaded in a structured format to the digital pen server, processed and then sent to the data repository

From which our business intelligence software would start to build statistical data graphical in the electronic health record of the patient. Monthly & quarterly reports would be auto generated from the Data captured by the Digital Pen & Paper.

“In my travels throughout the Kingdom and the world I have met few individuals as extraordinary as Dr. Bassam Al-Hemsi. In addition to being a well qualified physician, Bassam is a visionary entrepreneur. He also has an unselfish approach to helping others succeed. All of these qualities make him very special. He has my highest possible recommendation and my deepest appreciation.”